Databand integrates with different Apache Airflow deployment types to provide observability over your Airflow DAGs. This guide will cover platform-specific steps for tracking Apache Airflow in Databand. After following the platform-specific steps below, you will add our Airflow monitor DAG to your cluster and create an Airflow syncer in your Databand UI.

For the steps specific to your type of Airflow deployment, use the links below to jump to the relevant section:

Follow our standard Installing Python SDK manual to install Databand's dbnd-airflow-auto-tracking Python package into your cluster's Python environment. You might have to change your Dockerfile or requirements.txt if you have one.

For Databand tracking to work properly with Airflow 2.0+, you need to disable lazily loaded plugins. This can be done using the core.lazy_load_plugins=False configuration setting or by setting the environment variable AIRFLOW__CORE__LAZY_LOAD_PLUGINS=False.

You can read more about lazily loaded plugins in the Airflow's plugins documentation.

If you are using Airflow version 2.1.0, 2.1.1, or 2.1.2, please verify that the apache-airflow-providers-http package is installed, or consider upgrading your Airflow.

Astronomer allows you to build, run, and manage data pipelines-as-code at enterprise scale.

You can install dbnd by customizing the Astronomer Docker image, rebuilding it, and deploying it.
Check this manual for more details on how to do that.

In your Astronomer folder, add the following line to your requirements.txt file:

NOTE: Re-deploying the Airflow image will trigger a restart of your Airflow scheduler.

You can find your Airflow URL by going to the Astronomer control panel and selecting the Airflow deployment. There you can click on “Open Airflow” and copy the URL without the “/home” suffix.

The URL should be in the following format:
http://deployments.{your_domain}.com/{deployment-name}/airflow

Your {deployment-name} should be shown in the Astronomer UI as "Release Name". 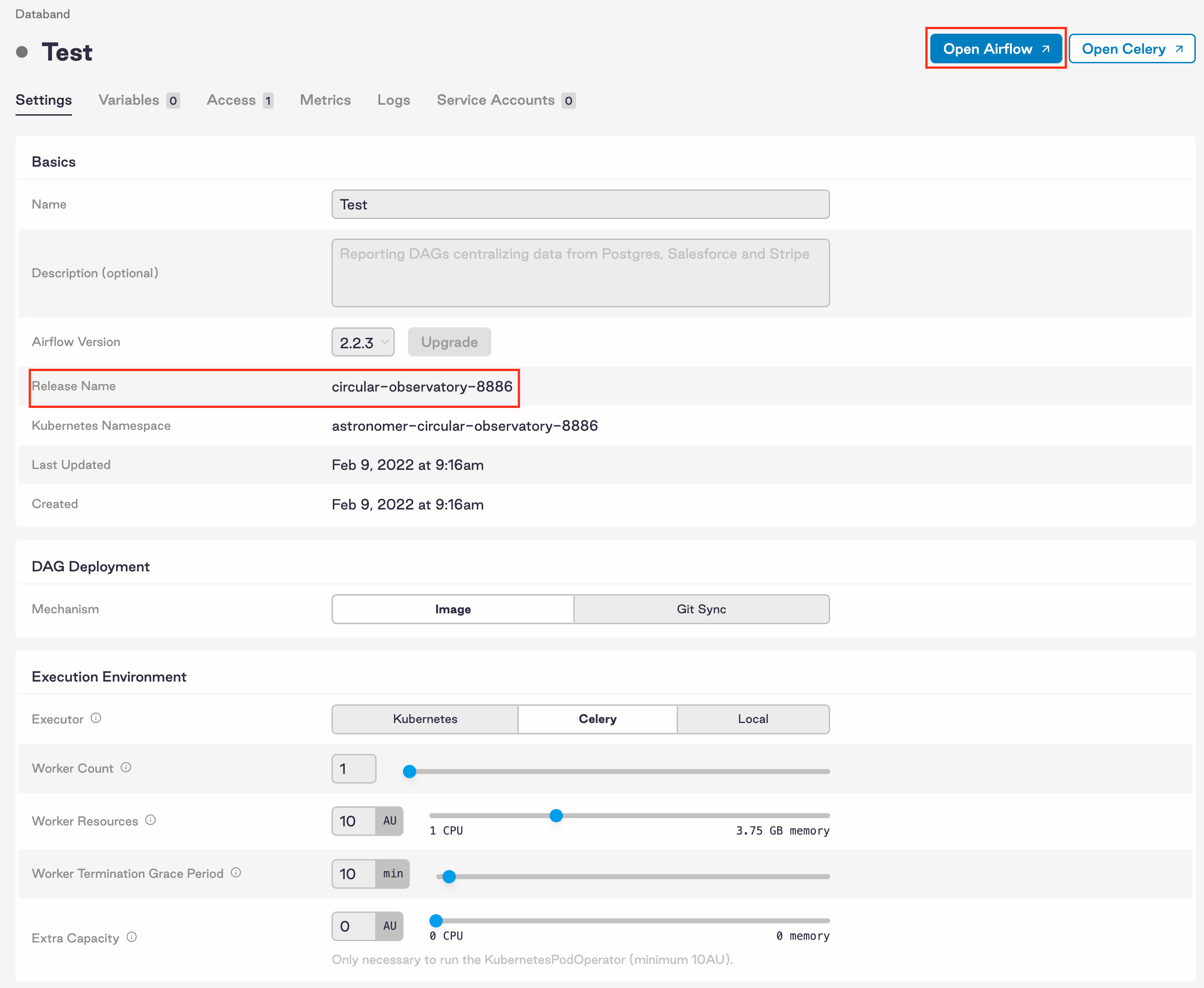 Amazon Managed Workflows is a managed Apache Airflow service that makes it easier to set up and operate end-to-end data pipelines in the AWS cloud at scale.

In MWAA’s S3 bucket, update your requirements.txt file with the following line:

The Airflow URL can be located in the AWS Console:
Go to AWS MWAA > Environments > {mwaa_env_name} > Details > Airflow UI.

The URL should be in the following format:
https://<guid>.<aws_region>.airflow.amazonaws.com

Google Cloud Composer is a fully managed data workflow orchestration service that empowers you to author, schedule, and monitor pipelines.

Update your Cloud Composer environment's PyPI packages with the entry below. Use the most recent Databand version (i.e. if you're running version 0.61.1, this is what you should use instead of REPLACE_WITH_DBND_VERSION). See Installing DBND for more details:

Please note that saving this change to your Cloud Composer environment configuration will trigger a restart of your Airflow scheduler!

For Databand tracking to work properly with Airflow 2.0+, you need to disable lazily loaded plugins. This can be done using the following configuration setting: core.lazy_load_plugins=False.

The screenshot below provides an example of setting this property in Cloud Composer.

The URL can be found in the GCloud Console:
Composer > {composer_env_name} > Environment Configuration > Airflow web UI.

The URL should be in the following format:
https://<guid>.appspot.com

NOTE: The monitor dag is being run automatically by the scheduler. There can be only one run at a given time, there is no need to trigger it manually. It is configured to restart itself every 3 hours. In case it's not running or failed for some reason, there is no lose of data, since when it's running, it will continue syncing data from where it stopped.